A few years after my NDE, I traveled through Virginia teaching SAT skills at various boarding schools.  One weekend I stopped to meditate in a beautiful forest and felt the presence of a Native American ancestor come to me and say, “Do not forget us.”  I promised him that I would never forget him or his people.  In every American Literature class, I teach the works of Black Elk, Zitkala-sa, and Sherman Alexie.  This doesn’t feel like enough, but it is something.  Watching films about Wounded Knee is a chilling reminder of how innocence was too often slaughtered, and I do not want my students to forget these moments.

Mid-summer I felt the stirrings of something that would be happening involving Native Americans in the U.S.  When I heard about Standing Rock, a part of me didn’t want to start this semester of teaching.  I wanted to go there and do what I could to help.  I longed to join with those working to protect our waterways, our sacred lands, our Mother Earth.  I knew there would be police brutality.  I knew there would be the same hatred directed at Native Americans historically.  I didn’t choose to leave everything to go there, but my heart was at Standing Rock every morning.

I feared history might repeat itself at Standing Rock.  As NPR put it succinctly, we have never seen anything like this before and it has been happening for hundreds of years. Both statements are true, and the thought that the pipeline might not be diverted was a difficult possibility to accept.

For months, I’ve sent prayers of protection and prayers of hope to the many people protesting the pipeline at Standing Rock.  At times, I felt angry and afraid that I might never live to see a world where mother earth is not degraded and soiled for the almighty dollar.  When the veterans showed up to help protect the protesters, I felt encouraged.   Bless you warriors. Bless every one of your lovely souls.  Bless everyone who did something to help.

For anyone not aware of this situation, please do research and stay in the loop.  The media did a horrible job by not covering this historic struggle.  Don’t let this moment in time slip away unnoticed.  Feathers, not guns, were held to the sky, and these protesters were hit with rubber bullets, freezing water, and tear gas.  They were strip searched and beaten up, but by God and Goddess they stood in the freezing weather for Mother Earth.  Songs and chants were given to heavens, and they were met with hatred day after day.  I hope my love and the love of so many others also reached them in spirit.

Thank God that finally the U.S Army has decided not to allow the oil pipeline to cross under the reservoir in North Dakota.  Please don’t let this decision be reversed in the future.  Protect the waterways.  Protect the sacred land.  Never forget the true history of Native Americans.  Never forget their struggle and their deep, earth-centered wisdom. 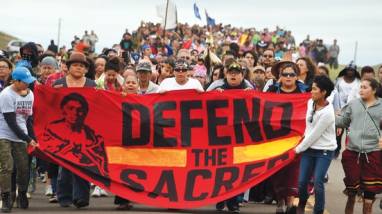 8 thoughts on “My Heart Has Been With Standing Rock”